An analysis of the International Aquatic Plants Layout Contest (IAPLC) 2010-2015 stats reveals some interesting and unexpected insights into the world of aquascaping. I have four take-aways for you.

Oleg Labutov put together this fantastic piece of IAPLC analytics looking at the top 30 countries over the years. I used it to see what patterns and trends I could spot. 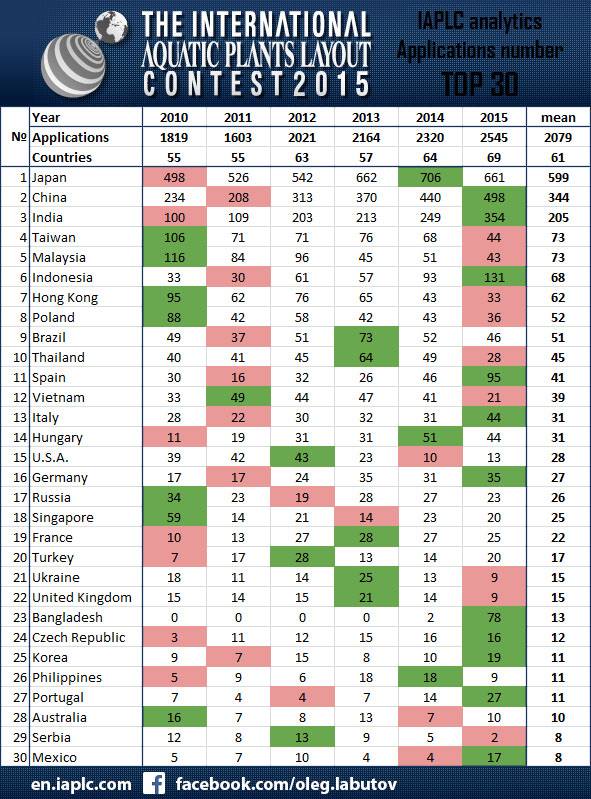 Simply by looking at the total number of entries, it seems clear that the hobby is growing globally. Of course, you must assume that more entries means more people in the hobby. I think that’s a fair assumption.

Also, the number of countries represented has gone from 55 to 69. More indication of an expanding hobby. Heck, Bangladesh went from 2 to 78 entries in just one year.

What does this mean? Overall numbers increase by many countries had their worst year in terms of entries. Is aquascaping becoming polarized to certain countries? Why?

Although not it’s worse year, that would be 2014, the USA had its second worst year in terms of entries in 2015. This is disappointing but not surprising.

I think the number of people setting up planted aquariums is growing consistently in the USA. However, there is woefully little focus on aquascaping. We need an Amano-like aquascaper/company to rally the troops and lead growth through talent, persistence and passion. We need a company and team like the Aquabase team down in Brazil that are full of enthusiasm and passion.

Speaking of the Brazilians, take a look at the top 200 finishers in the IAPLC 2015 (left). I don’t know how put this together but what can we interpret?

It seems obvious that Japan and China would take the number 1 and 2 spots given how many entries come from those countries. But look at 3… It’s Brazil And 4? France. Hmm… That’s interesting, no?

Let’s see what percentage of entries this represents!

Percent of entries that placed in top 200:

So, Brazil and France had fewer entries this year but the entries placed very high. To me, this indicates that these two countries have a small, but very talented group of aquascapers that are competing at a world-class level. These individuals are carrying the torch for their countries and it is they who must make some noise to better popularize aquascaping in their homelands.