Brazil is famous for the great Amazon, beautiful beaches, crazy Carnival and this year, the World Cup, followed by the 2016 Olympic Games! It is also the country whose master aquascapers (arquitetos aquapaisagistas in Portuguese) have burst onto the aquascaping world stage and taken it by storm!

I first started to notice the progress of Brazilian aquascapers back around 2009-2010.  My friend, Alex Ribeiro (Xylema), was writing his blog and, through my very poor Portuguese, I was seeing the beauty that they were creating with aquariums. However, they were not ranking in the top 30 in the most important aquascaping contests, the International Aquatic Plants Layout Contest (IAPLC) and the Aquatic Gardeners Association (AGA) Aquascaping Contest. In 2009, there were 13 entries from Brazil in the IAPLC with Renato Kuroki placing 38th. Not bad at all by any means.

In the 2010 IAPLC, Brazil began to make moves. It submitted 49 entries placing 9th in total number of entries from one country and most from a non-Asian country. However, the highest placed Brazilian that year ranked 125th. More entries but the caliber of entry appears to have gone down a bit. Still good, but not great.

In the 2011 AGA contest, Brazilian aquascapers took Second and Third place finishes in four out of the five aquascaping categories excluding the Biotope and Paludarium ones.

This is Luis Carlos Galarraga’s 2nd place finish in the 200-300L category:

It was in the IAPLC of 2011 that the above tank also placed 18th in the world. From little known aquascapers in a country that wasn’t really on the global aquascaping radar to Best in Show and 18th world ranking is quite a feat. That year, Brazilian aquascapers submitted 37 entries to the IAPLC. It slipped to 11th as for the number submitted from one country and the US replaced it as the highest non-Asian country.

Interestingly, the following year, Brazil only had one aquascape win in the 2012 AGA contest. However, that one entry was amazing and won the Best in Show. It was Leandro Artioli’s Unknown Way. 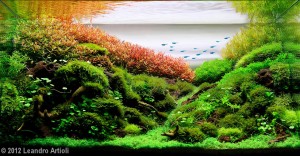 There was improvement at that year’s IAPLC too with an 18th and 19th world ranking- Galarraga and Artioli, respectively. However, the momentum Brazil had been showing over a number of years seems to pick up speed with a total of 51 entries and it regained its title as highest non-Asian country. 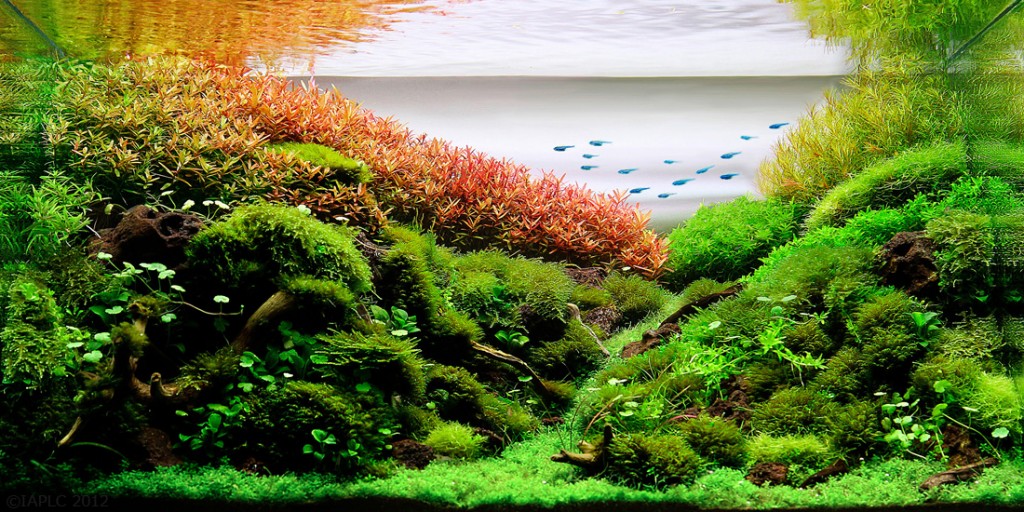 Then came the 2013 aquascaping contest season and the Brazilians were ready. They took the 2013 AGA Contest like a green and yellow hurricane winning Best in Show and placing in the top three in four out of the five aquascaping categories. What’s more, they had 10 aquascapes place in the Top 10! The next closest was Thailand with six. It’s clear the Brazilian aquascapers came en masse and they came to win!

The 2013 IAPLC was no exception. Brazil’s aquascaping powerhouse team won six out of the top 30 spots in a field of 2,164! They even tied the number won by the home team of Japan. No other country won more in the top 30. That’s truly incredible!

Last year’s IAPLC saw the greatest number of entries by Brazil ever, 73. It placed 5th in total number of entries surpassing Hong Kong and Thailand where aquascaping has a very long tradition and very high popularity.

As you would expect, online is where many share their thoughts, ideas and works. One excellent, albeit somewhat new, forum on aquascaping that I’m a member of is Natureaqua. Another good one that focuses on all things aquarist is Aquaflux. On the blogging side, I can’t recommend enough Aquarismo Alagoano. It has great commentary on the state of Brazilian aquascaping on the world stage. I encourage you to visit them and spend some time. Even if you don’t understand a word of Portuguese, pictures tell a 1,000 words (yes, it’s a bad cliche but it’s true in this case). 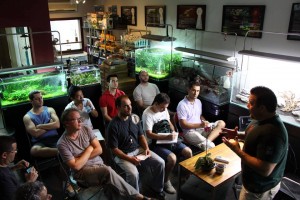 Complimenting the strong online community is a strong retail foundation. I think it necessary to have strong retail support for aquascaping to grow and flourish in a country. It’s one of the achilles heels of our growth in the US. In Brazil, stores like Luca Galarraga‘s Aquabase is filling that need. Not only do they provide local aquarists with the tools of the trade, they also hold workshops teaching aspiring aquascapers the art and science behind the hobby. These are not basic “infomercials” designed to get you the product du jour. They take the form of a curriculum with subjects like “advanced layout techniques” and “photography techniques for contests”. I counted fourteen sessions scheduled for the 2014 calendar year. They are serious about aquascaping and the community supports them for it.

Brazil also has an aquascaping contest that has been active since 2004. It’s called the Concurso Brasileiro de Aquapaisagismo or CBAP. In looking at the aquascaper statistics, it looks like most of the winning aquascapers come from the State of Sao Paulo with Parana second. That’s interesting to me because it shows that aquascaping is flourishing in the most densely populated part of Brazil. If you don’t know, Sao Paulo is a huge metropolis similar to any large city in the US except with much more traffic congestion due to it’s 11 million inhabitants.

The CBAP seems to be a training ground for those aspiring to enter the global contests like the AGA and IAPLC. It’s sponsored by some of the top companies in the industry like Eheim, Tetra, Sera and Marineland. What’s more, it’s successful. The global results are proving it. I can’t wait to see what up and coming aquascapers are doing at this year’s CBAP. I’ll be keeping a close eye! 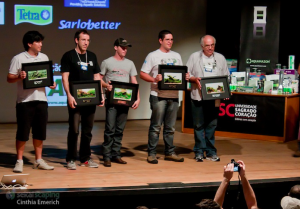 Winners of the 2012 CBAP Copyright http://www.cbap.com.br/index.php

Brazilian aquascapers have come a long way in a very short time. In five years, they’ve gone from 13 entries at the IAPLC to 73 and moved up the world ranking with amazing speed reaching the #3 spot! This doesn’t just happen. It takes hard work and dedication. It takes passion and that, my friends, is what Brazil’s got tons of!

One question to ask is what those of us who don’t live in Brazil can learn from what Brazilians are doing to expand the aquascaping hobby. I would venture to say that the hobby has been in the US as long as it has been in Brazil. However, the uptake of the hobby has not been the same. Yes, the US hobby has grown by leaps and bounds, but it hasn’t progressed on the global stage very much. The US submitted 23 entries to the IAPLC this year with the highest ranking of 219. We, in the US, are missing something and I venture to say it’s retail support and availability of good plant stock. What do you think is the issue (if there is one) in your country? But I digress! Back to Brazil!

Parabens a voces!, my Brazilian friends. It’s been fantastic watching your well-deserved recognition and growth over the years. I can’t wait to see what you bring to the aquascaping world stage this year and in years to come!

7 Comments on “Brazil’s Ascension to the Aquascaping World Stage”